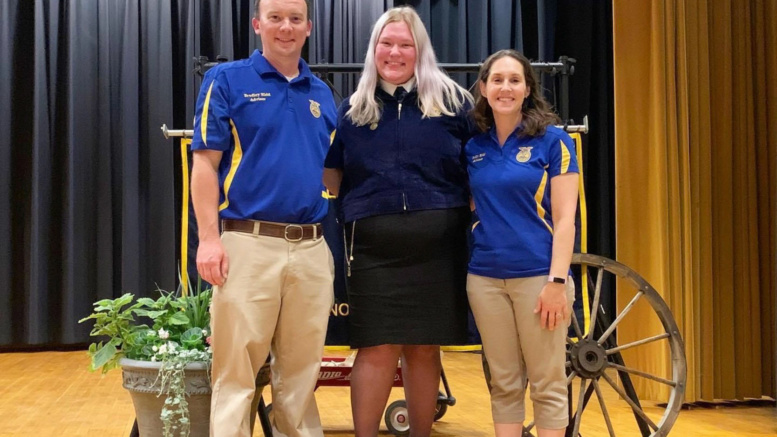 It can be challenging for any ninth-grader to carve out their niche in high school, and Haylee Davis found herself at a slight disadvantage after transferring to North Moore from Montgomery County.

Despite her limited exposure to agriculture, Davis soon felt at home in the school’s Future Farmers of America chapter. She went to her first FFA competition having memorized the organization’s five-paragraph creed, prepared to recite it and answer questions from a panel of judges. That creed professes a belief in the future of agriculture and “better days through better ways.”

Davis left that day’s competition with a new appreciation for those words and goals that would shape her high school years –– and beyond.

“My first competition broadened my perspective and made me want to make a difference,” Davis said. “I saw just how important the state officers were, and how good they were at public speaking, and how much they had a passion for agriculture, and how much they had a need to serve. Seeing them on that stage made me want to do that. I knew that my senior year I wanted to have the FFA jacket with the association name on the back.”

In the coming year she’ll balance her course schedule at N.C. State University with her role as vice president of the North Carolina FFA Association. During last month’s virtual convention Davis was selected as one of six students who will help lead the organization as statewide officers.

The selection process involves personal interviews and a written test on agriculture and the history of FFA in North Carolina. Prospective officers are also judged on “stakeholder engagement”: their ability to conduct a meaningful and well-informed interview with an industry professional.

Davis’ experience with creed speaking prepared her well for the next selection phase, which gave her 24 hours to prepare and memorize a speech based on an assigned topic.

“It’s a little bit nerve-racking, but that one was my favorite because I knew I could be prepared for that,” she said.

She credits North Moore agriculture teacher Bradley Kidd with helping her prepare for the process by organizing virtual interviews with farmers and other professionals in the industry.

As an officer, Davis will help represent the statewide student membership during state association meetings and teach leadership and teamwork to FFA members around the state.

As a member of North Moore’s FFA, Davis developed public speaking skills, won medals by demonstrating her capability with a shotgun in hunter safety competitions, and learned the finer points of poultry and livestock judging. So she takes especially seriously her charge as a state officer to motivate and inspire younger students to take advantage of every opportunity FFA provides them.

“I actually did not have an idea of an agricultural background. I knew there are a lot of people in FFA who grew up on a farm, but there are also a lot that haven’t. I never knew how big the agricultural industry in North Carolina is and just how important it is,” she said.

“I was taught so many leadership skills and met so many people from across the state. My eyes were truly opened to just how big agriculture is and how big of an effect I could have.”

An N.C. Teaching Fellows Scholarship will cover a significant portion of Davis’ college expenses as she pursues her goal of becoming a horticulture teacher.

So her year as a state FFA officer will just be the first of many that she hopes to spend living out the organization’s motto: “Learning to do, doing to learn, earning to live, living to serve.”

“Earning to live means making yourself better whether you’re receiving awards, doing well in school. Living to serve is the last part of our motto and it’s the one that I try to embody. This whole year is going to be dedicated to service. Wherever I can find someone somewhere that needs help, I want to be able to help them.”