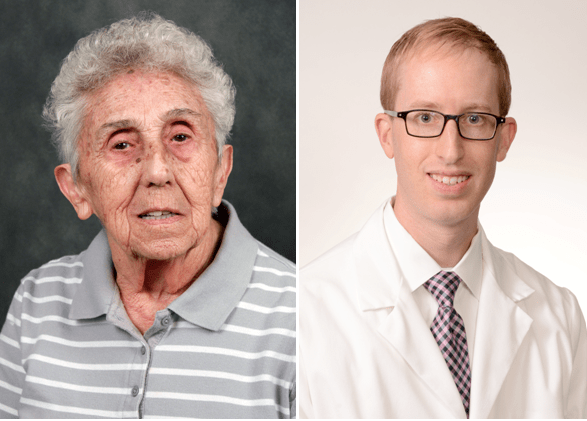 That changed when a series of medical incidents left her depressed, defeated and frankly wondering “What next?”

It took only one visit with general and colorectal surgeon Reid C. Vegeler, M.D., of Pinehurst Surgical to lift Leone’s spirits, however, and gave her hope that she and the two friends in her “Three Musketeers” group might one day resume their daily lunchtime schedule.

“He put her at ease,” said Leone’s daughter, Janet Britt, a physician assistant in Montgomery County. “It gave an old lady hope.”

Leone had barely gotten out of the head brace she had worn since breaking her neck in a fall when a painful lower gastrointestinal problem provided a setback. She couldn’t walk and found sitting painful, so her social life, and her spirits, took a nosedive.

Dr. Vegeler offered options for treatment that gave her hope that no one else had been able to provide.

“I had felt like I was [so] lost that nobody could help,” said Leone. “But I felt comfortable with the way he talked. He was soft-spoken and took his time.”

Dr. Vegeler gave Leone three options for treating her painful rectal prolapse – a condition that occurs when part or the entire wall of the rectum slides out of place – and discussed each with her before deciding on “the procedure of choice,” laparoscopic rectopexy, to attach the rectum to the lower end of the spine.

During what he described as a “frank discussion,” Dr. Vegeler also explained his expectations for Leone’s treatment and recovery.

The goal is to provide enough information that patients and their families understand their options and what to expect before, during and after surgery.

“I try to make sure that even if patients don’t want to make the choice themselves, they understand the reasons behind the choice and what the risks are,” he said. “Hopefully, that gives them more confidence in what’s going on as part of an honest approach from a surgeon. I really don’t think I’m any different from anyone else in that regard.”

During Leone’s procedure, performed in April at FirstHealth Moore Regional Hospital, Dr. Vegeler freed her rectum from all of the attachments and pulled it back up inside her abdomen. Using large, strong sutures, he then secured the rectum to the sacral bone to keep it anchored inside the pelvis and prevent future prolapse.

Generally, a procedure like the one Leone had would involve a resection (surgical removal) of part of the sigmoid colon (the part of the large intestine closest to the rectum). This was not necessary in her case, however, since an earlier procedure performed by another surgeon about 15 years earlier had involved a resection.

Leone spent about a week in the hospital and a few more days in inpatient rehab to regain her strength. As of her last visit with Dr. Vegeler, she was problem-free and “back to living the life she wanted,” he said.

“She has her life back,” said Britt.