April Stewart had never done a breast self-exam until one of her two daughters told her about a high school class discussion about breast health.

Although Stewart was only 35 and had no family history of breast cancer, the conversation with her daughter encouraged her to do a self-exam.

The lump she found in her left breast was cancerous.

On Saturday, Oct. 7, Stewart will join hundreds of other breast cancer survivors and their supporters in the 1in8K Run for Moore in the Village of Pinehurst. Sponsored by The Foundation of FirstHealth and the Sandhills Race Series, the 8K Walk/Run and 1K Fun Run/Walk will support The Foundation’s Cancer CARE Fund and Moore Free & Charitable Care Clinic mammography scholarships.

In 2016, 454 runners and walkers participated in a 1in8K that raised more than $20,000 for breast cancer support services in the FirstHealth community. 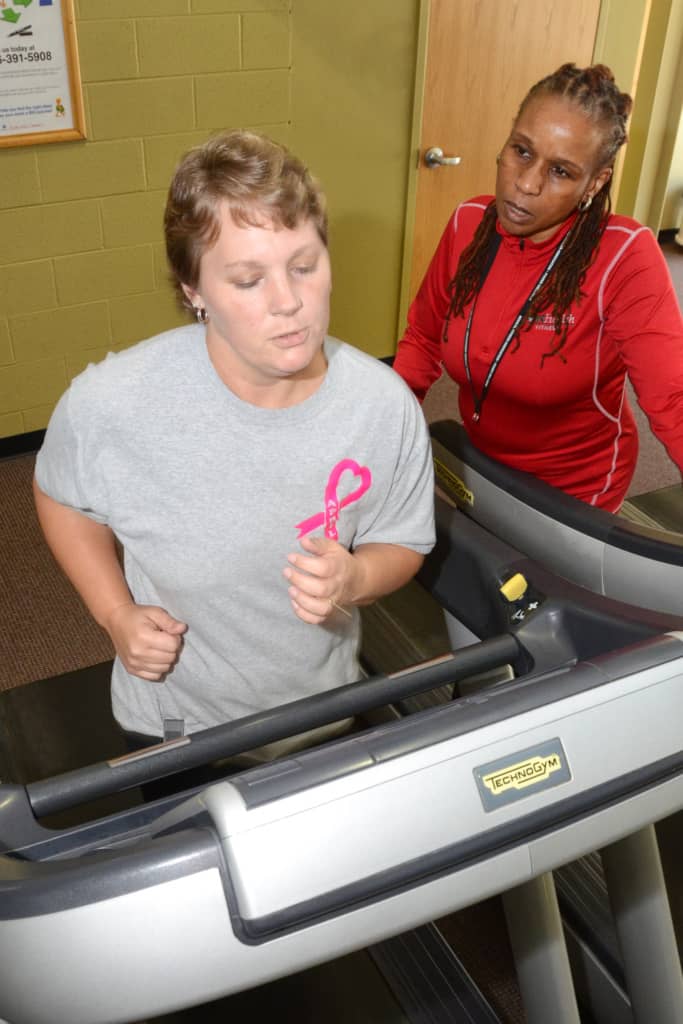 “I always had the goal of doing some kind of race, but I’d never followed through,” Stewart says. “This has been a perfect reason.”

As Stewart has prepared for the 2017 1in8K, her trainer, champion and mentor has been Cinnamon LeBlanc, manager of FirstHealth Fitness-Southern Pines. The two met through the Cancer Wellness Program that LeBlanc coordinates at the Southern Pines center and that Stewart started just weeks after her December 2016 mastectomy.

She had seen a flier about the program in a doctor’s office and thought it might help with the physical “deconditioning” she had experienced with chemotherapy and surgery and with the post-surgical strength and range-of-motion issues she now has with her left arm.

LeBlanc immediately thought about Stewart when she was asked to suggest a Cancer Wellness Program participant who might be interested in taking part in the race. Stewart had mentioned a longtime goal of running a race when she and fellow Cancer Wellness participants shared thoughts about personal goals at the beginning of their program.

“I knew a race was a goal she had always had,” says LeBlanc. “She was perfect.”

Together, Stewart and LeBlanc have decided on a walk/run as Stewart’s 1in8K goal – with their training emphasis on the run.

“She knows she can do the walk,” says LeBlanc.

Another goal is to finish the race in 75 minutes.

“She’ll probably do better than that,” LeBlanc adds, “but you have to set a goal.”

During a recent training session, LeBlanc timed Stewart at 4.5 mph on a fitness center treadmill.

Although most of Stewart’s training has involved the home-based program LeBlanc created for her, she has also worked with a trainer at FirstHealth Fitness-Richmond, which is closer to her Hamlet home than Southern Pines.

With race day approaching, she and LeBlanc plan to meet for a couple of trial laps around Moore County’s Reservoir Park to help prepare her for the race distance and outdoor temperature. Both believe she’ll be up for the challenge for which she has delayed her breast reconstruction surgery.

The 2017 1in8K Run for Moore will start and finish Saturday, Oct. 7, at the Pinehurst Village Green. The 8K Walk/Run will begin at 8 a.m., and the 1K Fun Run/Walk will get under way at 10 a.m. For more information, go to www.firsthealth.org/1in8k. For online registration, go to runsignup.com (search for 1in8k Run for Moore).

Registration is now open for Run for the Ribbons