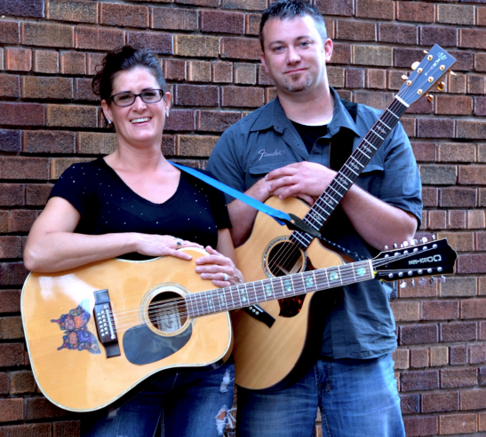 The couple that sings together stays together, if Amanda and Kristopher Pignone are anything to go by.

You might recognize the Seven Lakes duo by their band name, Rack & Pinion. “A Rack & Pinion are two types of gears that need one another to work,” explained Amanda Pignone.

Because of the pandemic, the two haven’t performed much since moving to North Carolina from Upstate New York this past July, but they hope that will change soon.

A Halloween bash at Sandhills Winery marked the couple’s first return to the stage in nearly two years. Soon after, they signed with the Lake House Bar & Grill to perform once a month over the course of the winter.

Rack & Pinion has also hosted two live shows on Facebook since their arrival in Moore County, one of which was a charity benefit that raised over $1,000 for a nonprofit serving homeless children. Back in New York, the couple performed at similar charity events in person somewhere around twice a month.

The growing New York-based group called Upstate Musicians recently recognized Amanda as “Vocalist of the Year” and Kris as “Bassist of the Year.”

When they aren’t jamming out, the Pignones do have day jobs. Kristopher is a production manager at Cascades in Wagram, and Amanda works remotely as a data administrator for a central New York school district.

Though she wishes there were more venues and performances spaces for local performers in Seven Lakes specifically, Amanda is very happy with the family move.

“We’ve been so grateful to people’s response to our music here,” she said, remembering a time a stranger approached her at the public pool, just to compliment one of Rack & Pinion music videos.

Kristopher Pignone hasn’t minded the pause in performing as much as his wife has. He’s never been one for the spotlight. Before Rack & Pinion formed, the two were part of a musical trio that formed after they met during a band jam session. He played bass, which allowed him to keep more to the back of the stage. But nowadays, as one half of an acoustic act, being in the limelight is unavoidable.

But when the two gave an impromptu concert shortly after their move, as a favor to their neighbor whose husband is struggling with an illness, Kristopher remembered his love of performing. They’d flung open the doors and windows of the house and played to the neighborhood.

After all, musical performance is in both of their blood.

Back in Upstate New York, Amanda grew up with a singer-songwriter father. As soon as it was physically possible, she picked up the accordion and tin whistle, then joined ranks of her extended family’s celtic and Irish music-inspired band, “Frazier Family & Friends.” By the time she turned 21, Amanda was performing on her own time.

On the other hand, Kristopher was the youngest in a brothers’ band that toured the country. His siblings disbanded when he was still young, but Kristopher never stopped playing bass.

It should come as no surprise that the Pignone children are also musically inclined.

Amanda’s oldest is back in upstate New York, but the couple have two younger kids in Seven Lakes. Before the pandemic, Amanda and Kristopher would bring their kids along to family-friendly shows and invite them up on stage. Impromptu jam sessions have always been a common occurrence in their household. Surround-sound karaoke is a given.

Because the couple has a bit of an age gap between them, Kristopher and Amanda also grew up listening to different generations of music, explained Amanda. Together, their library of songs is expansive. Their children hear too many genres to count.

On a normal afternoon, 11-year-old Roslyn Pignone can be found singing along to Willie Nelson, Pearl Jam, or Papa Roach. She plays clarinet and is building up her ukulele skills.

Not to be outdone by his older sister, 9-year-old Maddox Pignone also has the jukebox gene and is currently learning the recorder.

“We’re really lucky,” said their mother. “We’ve always had music in our lives.”

“We’re really lucky,” said their mother. “We’ve always had music in our lives.”

Rack & Pinion might perform soon at a venue near you, so keep your eyes on the band’s official Facebook page.