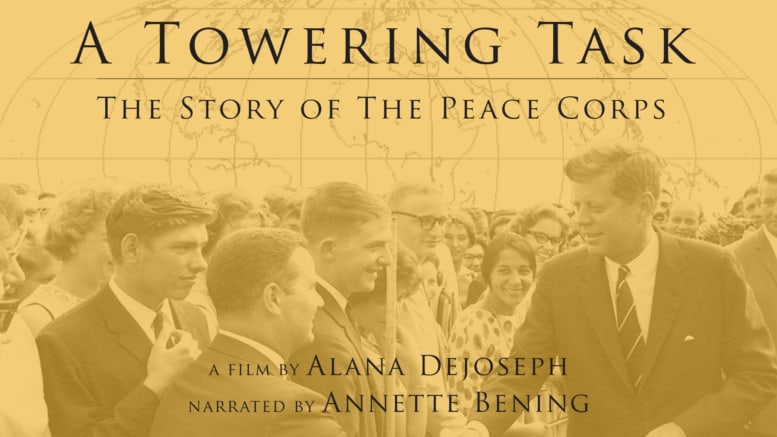 The new documentary, A Towering Task, tells the remarkable story of the Peace Corps and takes viewers on a journey of how to experience the world. The Sunrise Theater is proud to add the film to its Virtual Theater offering, making the new release available to viewers in the comfort of their home through June 18. “Tickets” are available on the Sunrise Theater website and the movie can be watched when it is convenient for the viewer.

A Towering Task features indelible interviews of current and returned Peace Corps volunteers, current and former staff, scholars and journalists, community members and leaders around the world (including Presidents Jimmy Carter and Ellen Johnson Sirleaf). Remarkable archival materials and stunning footage from around the globe bring to life an agency that represents to the world the American idea. By expertly weaving together personal volunteer experiences with the political machinations of the time, A Towering Task provides viewers with a visceral experience of President John F. Kennedy’s words “what together we can do for the freedom of man.”

In 1961, young Americans were looking for ways to serve their country. Motivated by the book The Ugly American, President Kennedy gave America the Peace Corps and appointed Sargent Shriver as the program’s first director.

Within weeks the agency was established and in its first year, hundreds of volunteers were serving in dozens of countries.  However, trouble was soon on the horizon: Rapid growth and a disillusioned public during the Vietnam War soon had the agency fighting for its existence, and it wasn’t until the 80s that the Peace Corps found an unlikely champion in President Ronald Reagan that brought about an unexpected revival.

As the agency is nearing its 60th anniversary, more than 200,000 volunteers have served in over 140 countries. At the beginning of 2020, more than 7,300 Americans of all ages were serving their country and seeking to understand their place in the global community. They worked at the forefront of some of the most pressing issues facing the global community demonstrating what it means to be an American, both in the U.S. and as part of a broader global community.

In response to the current pandemic, in the first time in its history, the Peace Corps has evacuated all volunteers, and the future of the agency is in question.  As the pandemic subsides and the world once again will have to reevaluate how to cooperate, the story of the Peace Corps will serve as a reminder of Kennedy’s call to action: “Ask not what your country can do for you—ask what you can do for your country. My fellow citizens of the world: ask not what America will do for you, but what together we can do for the freedom of man.”