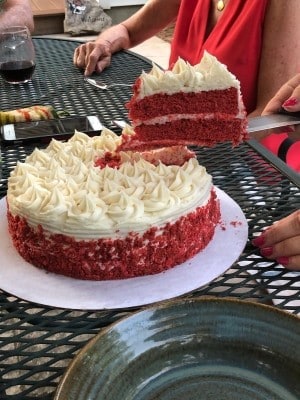 Heather Watkins-Vaughan has only lived in Seven Lakes North for 2 years, but most already know about her talent and love of baking.

Heather moved to Seven Lakes from Sunset Beach near Calabash with her husband, children, and grandchild.

During her childhood, Heather was raised by her mother – both a baker and a pastry chef.  But after graduating high school, she strived for a career as a landscaper.

Working side-by-side with engineers while operating heavy equipment was the daily life for Heather.  From the age of 17-42 she was a workaholic with her career and managed a crew of up to 24 individuals doing landscape design.

Despite her success, Heather’s landscaping career was cut short due to a work injury.  The physical limitations made it impossible for her to go back to that job – and most other jobs for that matter.

“I can’t stand for long periods of time,” she said.

When Heather’s mom was in the hospital in January, Heather had a hard time.  She chose to work through her emotions by bringing back her mom’s passion of baking.

“We would talk about how we used to cook together,” Heather said.  “She said while she was at the hospital, why don’t I bring a treat every day for the staff.”

Heather began baking daily for the nurses, following her mom’s idea.  Even after her mother’s passing in January, Heather continued to make her own memories in her home with baking.

She and her family began baking their own bread, pies, and pastries.  With the constant motion around the kitchen, she wasn’t slowed down by her physical limitations.

When COVID-19 spread, the initial panic caused many stores to be without bread and other goods.  Heather, who had been used to baking for her own family, chose to help friends and neighbors by baking home-made bread for them.

“I started wondering what my mom would have done during all of this chaos,” Heather said.  “She would have tried to find the helpers and spread joy.”

Heather started the “Pay It Forward” program where she would find individuals who were helpful and bake them a free special treat.  Every week she would find someone special to give some recognition to.

Heather also began searching for folks who were new to the Seven Lakes neighborhood to give them home-baked welcoming goodies.

“When we moved here there was nobody who came to welcome us other than the landowners association,” Heather said.

She hopes that with her expertise, she can go the extra mile to help make newcomers feel welcome in the neighborhood.

“It really is a great place with a lot of opportunities and friendliness,” she said.

Baking for the community has inspired Heather to go back to school, and she is currently taking online classes on pastries, cake decorating, cookies, and more.

“I’m doing all this stuff online while the kids are asleep,” she said.  “I do different things like baking food from different cultures for those from other countries and baking for those with dietary restrictions.”

Heather considers herself the community’s personal chef and is open to making custom orders.

“Every order is 200% customed,” she said.  “If somebody asks me to make something, I do.  Tell me exactly what you’d like; forget all preconceived notions.”

Food is made specifically for each client.  Heather has customized orders for food sensitivities such as diabetics who have never had donuts and even those with celiac disease.

With the positive response she’s had with her baking, Heather is considering opening her own bake shop in Seven Lakes.

“Seven Lakes needs something like that – a cool little gathering place where people can sit outside and have a fun pastry from when they were a kid,” she said.

To get in touch with Heather for some baked goods, message her on Facebook by finding Heather Watkins-Vaughan, or text her at (910) 398-0195.