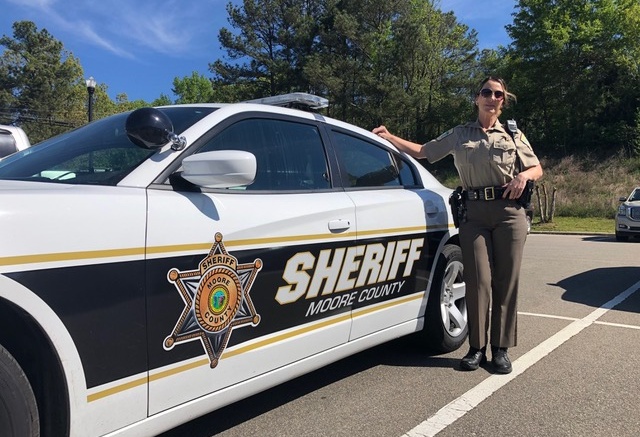 When Moore County Sheriff Ronnie Fields set out to test a community policing program, he chose West End and Seven Lakes and posted Deputy Monique Dilorenzo in the community.

It didn’t take long for results to show the impact in a community that has grown to more than 9,000 people over the last few years.

“Property crimes just went out the roof, and since Mo’s been there, it’s made a difference,” Fields told the Board of Commissioners last month. “It’s cut down on our response times and that’s another plus that we’re looking at to keep someone out there during the main call volume times.”

“Community policing,” especially in areas removed from larger population centers, may be here to stay.

The gated communities of Seven Lakes have a combined population of 4,800 people. Including that and the greater West End area, about 9,300 people live west of Pinehurst, but the area is still considered “remote” and can suffer from delayed response times.

More than 100 businesses are located in the area, and the remoteness can be a liability at times. First Bank in Seven Lakes has been robbed several times over the years, Fields said.

The need for community policing in the area comes as the call volume in the area has increased by 60 percent in the last three years, according to information provided by the Sheriff’s Office.

The Computer Aided Dispatch reported that 8,897 calls were made for service in the West End service area. In 2018, 5,361 calls for service were answered in that same area. Those calls include every type of incident, whether self-initiated or not, criminal violations, narcotics violations, traffic enforcement, alarms and business checks, mental patient transports, and assisting other agencies, Major Andy Conway said.

“We can not point to any one specific contributing factor, but the increase in population and new neighborhoods would be a logical deduction,” Conway said.

The Seven Lakes/West End area is the largest populated unincorporated area in Moore County.  If the area did incorporate, it would be the fourth-largest municipality in the county behind Pinehurst, Southern Pines, and Aberdeen, Conway said.

Dilorenzo was moved to the Seven Lakes/West End beat this past January after a few months on the job. The return to a community setting, as opposed to her previous duties covering a portion of the county on the roads, is where she feels like she thrives.

After all, that was one of the reasons why the 40-year-old mother of one son, Sabin, entered the career field nearly six years ago.

“I was excited because that’s my passion: dealing with the community and its citizens,” Dilorenzo said. “You do everything. Whether it’s stopping vehicles for speeders or getting into drugs or DWIs. You’re keeping that community safe and you’re making sure those citizens know they are protected and you’re there for them. Period.”

Dilorenzo is in the Seven Lakes/West End area as the area’s population has grown in recent years, leading to more property crimes and a larger call volume for the Sheriff’s Office. She now works in the area during the high-volume hours of the day, meaning that her job doesn’t come with set hours on weekdays.

The job of community policing is all encompassing. That’s nothing new for Dilorenzo; she spent five years at the Carthage Police Department before joining the Sheriff’s Office in September.

“She’s a deputy that I can assign anywhere,” Fields said. “She gets out there and does her job. She doesn’t mind getting her hands dirty. She does an awesome job.

“She has the demeanor, the personality and the work ethic that I need in that community.”

She understands the current climate that comes with working in law enforcement, and the way to improve public perception of those wearing badges is to engage with the public in a positive light, Dilorenzo said.

“We need just to get back to where America is working together and see that with the police they see that we are here to help,” she said. “The citizens need to feel that we are there for them. We’re not just out there just to make arrests. We are there to help people.”

She mentioned that, while with Carthage, she would go eat lunch with elementary school students. The initial meetings with those students led to the kids putting their hands up and saying, “don’t shoot” when she would walk in the school. More time spent with the students led to a change.

“After I started going and just sitting with the kids and just talking with them and hanging out with them, they would run up to me and call me Officer D,” she said. “It was a completely different vibe.”

Dilorenzo said that was a goal when she started a new career in her mid-30s at Sandhills Community College’s BLET program. For her, this new career path was following faith, which she discusses frequently with residents of the community she is serving.

“I really felt like the Lord put it in my heart to do it. It’s not something I wanted to do growing up. It just came about,” she said.  “Everyone’s been very welcoming and they know that I’m the deputy out there to help them with whatever they need.”

To go along with her post, Dilorenzo has an office space in the Seven Lakes Fire Department. That allows her a location to work and keeps her close when the fire and rescue personnel go out on a call.

The plan of having a deputy full time in the area was on the list of needs when Fields took office two years ago. He says that, through the help of the commissioners, many of those needs have been met.

“It’s a great, great, great program. Would I like to expand it to other neighborhoods? Absolutely,” Fields said. “I haven’t got to my wanted list yet, but these are needs that the citizens and the Sheriff’s Office needs to fulfill their obligations.”

But with that, Fields knows it would come with a price tag. With one deputy off the rotation of covering the roads, Fields’ plea to the commissioners for this year’s budget is to fill that empty position to increase the Sheriff Office’s presence across northern and western portions of the county.