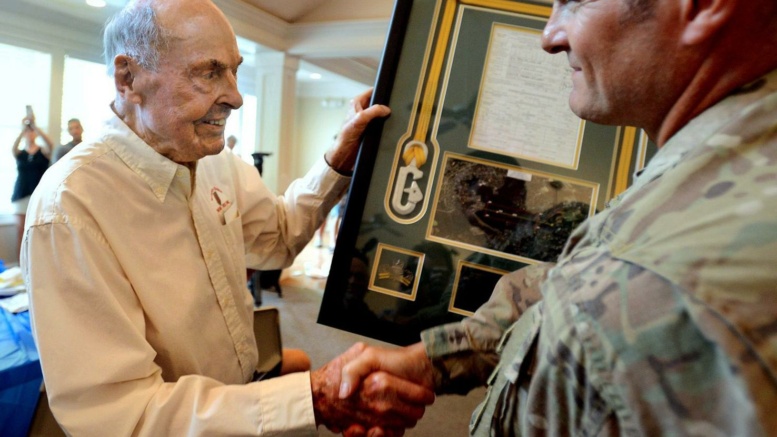 A humble hero, Arnold Raymond “Ray” Lambert died Friday at his home in Moore County, surrounded by his family. The former Army medic and D-Day survivor who earned two Silver Stars for valor in combat was 100.

Although details are still being worked out, Lambert is expected to be buried at Arlington National Cemetery with full military honors. A memorial service will also be held at Omaha Beach, likely in 2022 due to the ongoing COVID-19 pandemic.

His longtime friend and neighbor, Dr. Darrell Simpkins, said Lambert was alert, taking calls and seeing visitors until the day before his death.

“It is amazing, the influence he had. We have gotten calls from around the world since Ray passed. He was a true hero and just a model citizen,” Simpkins said.

Born in Alabama in 1920, Lambert enlisted in the Army at the age of 19. By the time the Allied Invasion began, he was a 24-year old staff sergeant, “an old man,” as he described himself, battle-hardened from having already fought in North Africa and Sicily. He had also trained all of the medics under his command in the 2nd Battalion medical section of the 16th Infantry, 1st Division — the Big Red One.

Completely exposed to enemy gunfire on Omaha Beach, he encouraged his men to get the wounded behind the only shelter available: a mound of discarded concrete at water’s edge. It later would become known as “Ray’s Rock.”

Lambert was shot and pierced by shrapnel while he cared for his fellow soldiers. Returning repeatedly to the water to save drowning men, on his final trip he was struck by the ramp of a landing craft, an injury that broke his back. He eventually lost consciousness from pain and the loss of blood.

He and his brother, also an Army medic and injured in the onslaught, were put on the same boat and taken to the same field hospital in England to recover.

During his military service, Lambert was wounded four times and was awarded three Purple Hearts, two Silver Stars, a Bronze Star and the French Legion of Honor.

In 2018, the village of Colleville-sur-Mer, one of the first towns that Allied Forces were able to liberate, installed a plaque at Ray’s Rock to commemorate Lambert and the medics who served with him in the 2nd Battalion medical section.

The following year, to coincide with the 75th anniversary of D-Day, HarperCollins released Lambert’s memoir, “Every Man a Hero,” co-written with The New York Times bestselling author Jim DeFelice.

Lambert was also lauded by then-President Donald Trump during a D-Day memorial service at the American Cemetery overlooking the beaches of Normandy. He also had the opportunity to tell his story to famed NBC newsman Tom Brokaw, and was filmed for a documentary about the World War II American cemeteries in Europe.

Oscar-nominated actor Sam Elliott also shared Lambert’s account as part of the 30th annual National Memorial Day Concert in Washington, D.C., which was broadcast live on PBS in 2019, and again during a virtual performance in 2020.

During an interview on NPR’s All Things Considered radio program, Lambert said he simply hoped to be remembered as a “good soldier and a good person.”

In a sense, Lambert never really left active duty. He went on to graduate from the Massachusetts Institute of Technology and founded two companies, one an industrial electrical contracting business. He also stayed involved through the Society of the First Division and was a distinguished member of the 16th Infantry Regiment Association, in addition to speaking to school groups — both in the U.S. and abroad — and other organizations.

Here in Moore County, his stately home in Seven Lakes West overlooks the “Ray Lambert Water Drop Zone” on Lake Auman, which is used by the military to train soldiers to land in or near water while in combat.

Simpkins said Lambert had been like a father to him. His own dad, who died a number of years ago, also served in World War II.

“My father would never say anything about what happened to him. When I was young and the news would come on with coverage from the Vietnam War, he would leave the room in tears,” Simpkins said. “Having Ray tell me about his experiences gave me a lot of insight into my own father. I had never known what to ask him; Ray gave me that opportunity.”

Despite the accolades and high honors, Lambert always saw himself as a veteran, nothing more and nothing less.

“I’m not a person that makes a lot about myself. So many things happened because of where I was, what I did, not what I said,” Lambert said, in an interview with The Pilot in 2018. “I feel that it would be a waste of life to do nothing and say nothing about the things you have been involved in. When you can help other people and have the chance to do things as I have.

“That is what gives me a great feeling at my age — that I have not wasted my life.”