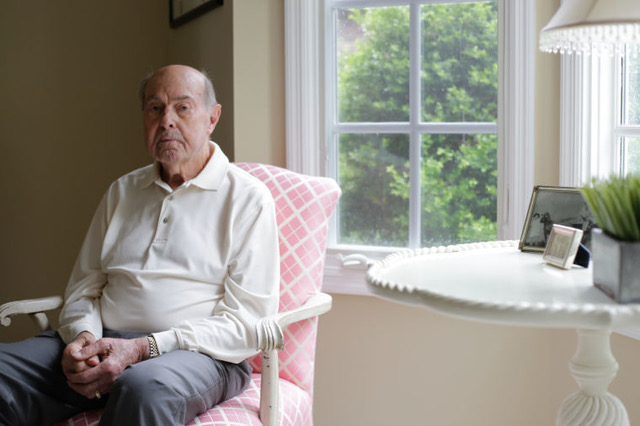 On a warm May afternoon in 2014, I drove to Seven Lakes to interview Ray Lambert for a Memorial Day tribute. Ray was known for presentations to civic and other groups about June 6, 1944 — D-Day — when the 24-year-old medic from Alabama along with 150,000 American, Canadian and British troops landed on five Normandy beaches. On Omaha Beach alone, 2,000 U.S. troops were wounded, killed or went missing.

Lambert died an acclaimed hero on April 9, at 100, his bravery lauded by presidents, military brass and the press at memorial events in the U.S. and France.

Back in 2014, Ray (he asked me to call him that) was 93. I have experience communicating with elders; my parents and in-laws all lived into their 90s. As for war stories, after growing up on sanitized tales told by my father, an ambulance driver in France during WWI, I knew the lingo.

I expected some hearing and comprehension issues, possibly a rest room break. Ray, however, needed only a few questions to prompt a narrative that began in rural Alabama where the only job the young man could get was a veterinarian’s assistant, giving rabies shots to dogs. He told me about meeting and marrying his wife in two weeks, coming home to a 4-year-old son he had never seen, and concluded with the ambitious young medic’s post-war success in the electrical contracting business.
I needn’t have worried about coherence. Ray excelled at chronology. He painted word pictures. He talked non-stop for almost 90 minutes, without even a sip of water. It felt like listening to someone who had been in the North Tower on 9/11 when the first plane hit.

The retelling invigorated Ray, exhausted me.

He spoke of shooting a young German soldier at point blank range. “It doesn’t take long when you see your buddies getting killed that you become a killer yourself.” But his most graphic narratives dealt with the amphibious landing, which had been postponed a day because of weather. Tension ran high. Before dawn, Ray and his buddies — many still teenagers — shared what he called a Last Supper of powdered eggs.

Imagine remembering that detail, along with how the frigid, choppy water soon filled with floating bodies reeking of fuel and vomit.

Ray sat in an armchair overlooking the deck, which overlooks Lake Auman, but I could tell from his inflections that his mind was in that water, reliving the scene: wounded in the elbow and thigh, he managed to tourniquet his own wounds, inject himself with morphine and return to pull at least three soldiers onto the beach where he treated them and returned for more.
“I saw a man with his whole body on fire, even his shoes.”

Ray lost a best friend that day but his brother, who had joined the army with Ray, was wounded and survived. Both were shipped to England to recover. Ray had been wounded twice before, in North Africa and Sicily.

The rock on Omaha Beach where he sheltered the wounded and dying bears a plaque identifying “Ray’s Rock.” He returned to Normandy 10 times for commemorative occasions. A room in his lakeside home was filled with memorabilia and awards, including the French Legion of Honor.

I could have listened for hours.

I didn’t see Ray again until 2019, at a book signing of the autobiographical “Every Man a Hero: A Memoir of D-Day,” published by Harper Collins. At 98, still no glasses, no cane, no hearing aid, enviable waistline. Big smile for the standing room only audience. Even a few jokes. He squeezed my hand hard and said he remembered our afternoon together, beside the lake, when we both shed tears.

I’m sad that Ray is gone but glad he was rewarded with a long, successful life beyond military service. Right about now we could use more news of American heroes providing inspiration amid political strife and insurrection. Reviewing Ray’s story made me want to dump a few Washington headliners into that frigid, choppy water and watch them maneuver, fully laden and under fire, to the beach.

Despite the pandemic, I hope Ray’s passing is noted with military honors, which, besides a 21-gun salute and folded flag might include Peter, Paul and Mary’s war lament: