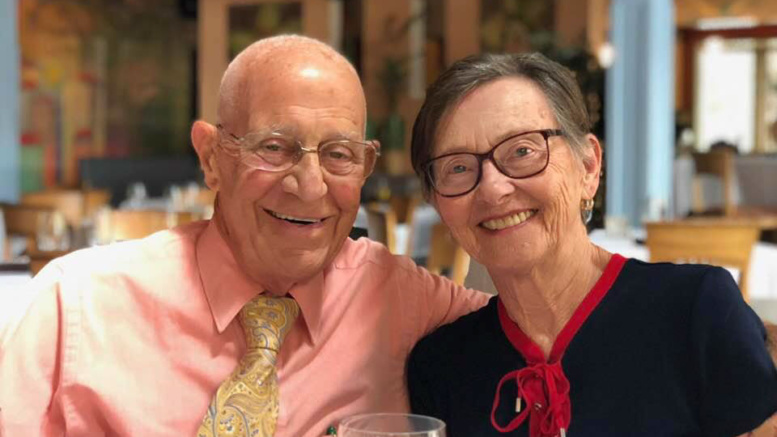 Bob Racine was always looking for ways to inject positivity into the community. His tireless enthusiasm, passion for civic affairs, along with his love for his family, faith, and scouting, were his trademark.

The former president and longtime member of the Seven Lakes Landowners Association’s Board of Directors died on April 5. Racine was 84.

The Red Cross Blood Drive in Seven Lakes scheduled Monday, July 12, from 1:30-6:30 p.m. at the Northside Clubhouse, will honor Racine’s longtime service to the organization and community. To make an appointment, call 1-800-RedCross(7332767) or go online to redcrossblood.org and enter the Sponsor Code “sevenlakes.”

“He loved his community and served with grace and class,” said Community Manager Jeanette Mendence. “Being a Board member is one of the most thankless volunteer jobs. Bob always did it with a smile on his face.”

Mendence said he had such a knowledge and history of the community, that she will miss his daily email and “picking his brain.”

Even while dealing with significant health issues, Racine attended every meeting, including the association’s Annual Meeting on March 27, as was his custom, wearing a suit and tie.

“I miss Bob. He was a great man,” Mendence added.

Racine and his wife, Nancy, moved to Seven Lakes North in 2008, relocating from Florida to live closer to family. The couple’s daughter, Amie, and her family live nearby in McLendon Hills.

Daily walks with his silky terriers, Bogart and Bacall, quickly established Racine as a regular presence in the community. He credited the friendly pooches for giving him the opportunity to strike up conversations with his neighbors.

“They got the attention. Through them, I met many, many people who would otherwise never stop and chat,” Racine said, in comments to his fellow SLLA Board members before he stepped down from his leadership role this past spring.

Born and raised in New Hampshire, Racine graduated from the Boston University School of Law in 1960. He opened a private law practice and also served as a town moderator in addition to organizing a student-oriented drug education program in New England.

“Forced to retire at 65,” he would joke, Racine quickly became bored and took up a second career as a security guard in a gated, retirement community.

After relocating to Seven Lakes, he volunteered his time as a Red Cross blood drive coordinator for nine years and also served on the Red Cross Board of Directors. Racine, an Eagle Scout, also helped to establish a Cub Scout Pack at the Village Chapel/Trinity Christian Church, served on the Chapel in the Pines Board and with the Seven Lakes Kiwanis Club.

Racine was first elected to the Seven Lakes Landowners Association Board in 2011 where he served continuously for 10 years. He chaired or served as a member of the association’s Community Standards, Judicial, Architectural Review Board, Lakes and Dams and Recreation committees. He also served as SLLA president for one year.

In 2016, he was recognized as the SLLA Citizen of the Year.

“Bob has been a treasured member of our community and has been actively involved in all aspects of Seven Lakes for many years,” said SLLA Treasurer Kim Doolitte. “For those of us fortunate to have worked with him, there is nobody who was willing to put in more effort to ensure this community continues to grow and thrive as the demographics in the area continue to evolve. His leadership will be deeply missed. We all hope to at least come close to having as much positive impact on the community as Bob had.”

Racine suffered from pulmonary fibrosis which had slowed him but couldn’t keep him down, said daughter Amie Collins.

She was in medical school when Racine had a heart attack several years back. That incident was part of his decision to relocate to North Carolina, where Collins now works as an emergency medicine physician in Asheboro.

“Seven Lakes was such a big part of his life for the last 13 years,” she said. “The community meant a lot to him.”

She said her parents had also recently dealt with the sudden loss of their son, her brother, Brian, in January.

“He was an awesome dad, a very hands on dad. I remember he would come home for dinner and spend time with us, but then work all hours into the night,” Collins said. “It’s never easy to lose someone. But we are so fortunate to live here and that my dad decided to live here and got to know my kids. When I look through my cell phone, he is in every picture with our kids.”

Collins said her dad always believed it was important “to live your passions.”

The Racine family is compiling a book of memories that will be displayed at a private memorial service to be held this summer. She welcomes Bob’s friends in the Seven Lakes community to contribute. Amie can be reached at  erdocinwv@hotmail.comLaura DouglassThe Pilot145 W. Pennsylvania Ave.PO Box 58Southern Pines, NC 28388Direct #910-693-2474
ThePilot.com