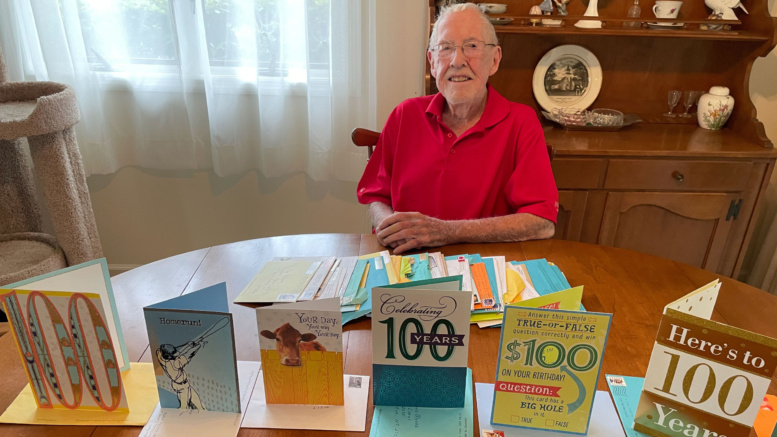 Neighbors of long-time community member Ray Moore are taking time to wish him a happy 100th birthday this month.

Moore moved to Seven Lakes West with his wife Vivian in 1985 as a WWII veteran, a retired engineer and a passionate golfer. For every year he has spent on this earth, close friend Marti Elliott is collecting a birthday card. Her goal is for Moore to receive 100 cards from well-wishers.

Elliott and Moore became fast friends after they met playing golf. He was a regular at the Golf Club and played three or four times a week into his 90s. “He’s a marvel to me,” said Elliott. “100 and he’s still driving and going to the grocery store. He really takes care of himself.”

According to Elliott, Moore is a beloved member of the community and everyone is always asking after him. The response to her request for 100 cards was enthusiastic, and as of the week before his birthday, Moore had already received at least 75 cards.

Moore’s passion for golf started when he was 8 years old, swinging a 5-iron with a hickory handle on his family’s farm in Mansfield PA. Moore spent hours practicing in the pasture. It would be another 12 years until he stepped foot on a real golf course.

During WWII, Moore was drafted in 1941 into the Airforce/Army. As a member of 4085th Bomber Group, 828 Squadron, he earned the National Defense Medal and Good Conduct Medal.

During those years, he also met his wife Vivian. While stationed in Italy, he spotted her at a cafe with friends. She was serving as an army nurse at the time. The two spoke and parted ways, but their paths crossed again unexpectedly in a VA hospital in Georgia where Ray was being rehabilitated from an injury. Vivian didn’t remember Ray, but he remembered her. A year later the two were married.

Vivian passed away some time ago, along with Ray’s siblings. But the couple’s son Eric, has made a life for himself in Montana.

In 1945, Moore left the service to attend Georgia Tech as an engineer. Upon graduating, he spent 35 years working for BF Goodrich, Industrial Products Division.

Over the next few decades, Moore’s job led him all across the U.S. During these travels, he always had his golf clubs in tow, playing courses in a total of 48 states. Only when he turned 95 did he retire from the greens.