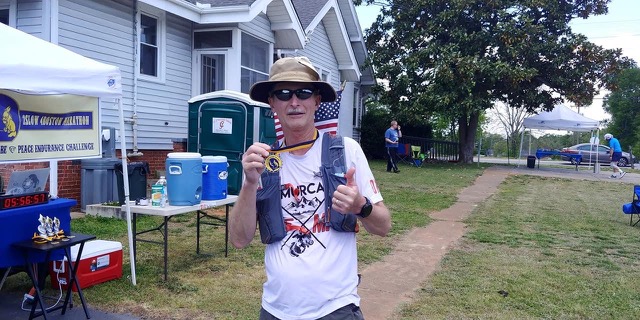 West-side resident Ben Benjamin is without a doubt, an active member of his community. Whether he’s canoeing, sailing, playing the bugle, or running a marathon, Ben is always up to something.

Benjamin’s official responsibilities include acting as Co-Chair of Seven Lakes West Land Association Finance Committee, being a member of the IT Committee and an admin of the Seven Lakes West Facebook Group. Previously, he’s been on the Communications and Legal Committees, as well as the SLWLA Board of Directors.

But Benjamin’s unofficial duties include festooning the “Christmas Boat,” regularly donating blood to The Red Cross, helping the Water Sports Club secure fishing habitats under the docks, hosting The Annual SLW Open Water Mile Swim, and much more. For all of these reasons, the SLWLA chose him as the recipient of last month’s Unsung Hero Award.

Benjamin and his wife Sue moved to Seven Lakes West several years ago from Indianapolis. They were chasing the warmer weather.

“Having a lake that does not freeze is really nice,” wrote Ben in an email.

The Benjamins are an outdoorsy and nature loving family.

“We love living on the lake and having the ability to walk out the back door to swim, fish, boat, sail, kayak, peddle boat, canoe, paddle board and pontoon cruise,” he said. The couple has two grown daughters, both of whom are settled nearby.

Public service is something that has always been in the family. Ben and Sue each had long careers with the Veterans Administration, primarily working in medical centers. Both of their fathers served in WWII. Before he was employed by the VA, Ben spent four years in the Marines.

Being in the service taught him about many things, said Benjamin, including his passion for running. For two years, he was stationed at Camp Smith in Hawaii.

“Did my first Marathon in Honolulu, or should I say it did me,” he joked.

Nowadays, he frequently participates in distance runs. At the end of July, he planned to attend a race in Wisconsin, and hopefully reach the benchmark of running 100 miles within 24 hours.

In 2005, Benjamin was inspired to sign up for “Bugles Across America,” a volunteer organization that coordinates live buglers for veteran events free of charge. He’d learned trumpet growing up because his father played it, and spent many years performing in marching bands, often alongside his brothers.

Despite all of his responsibilities, he always makes time for family. He and Sue enjoy babysitting their granddaughter whenever they can.