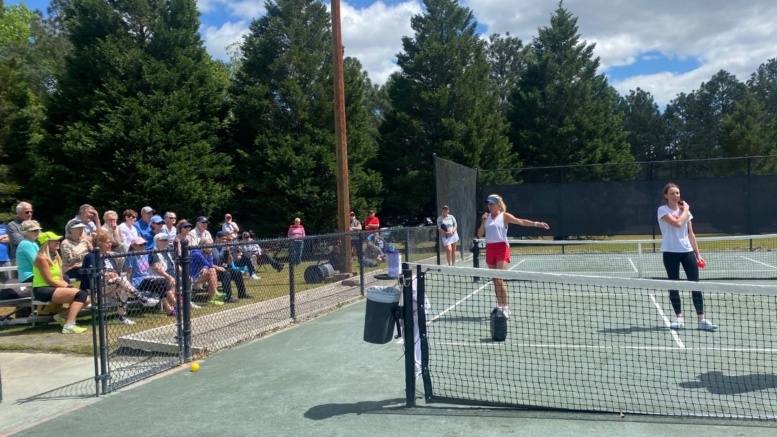 Club co-owner Canyn Russell speaks to a curious crowd on opening day of the courts.

Co-owners Canyn Russell and Katie Carpenter had gauged their members’ interest in the game by setting up temporary courts, and were met with high demand. The duo started building, and within two weeks, they had constructed four, pristine, clay courts.

Carpenter and Russell have owned The Racquet Club at Seven Lakes for several years now. Carpenter was born and raised in Seven Lakes; she made the Pinecrest High School Tennis Team, then joined the team at North Carolina State University. Recently, she moved back to Seven Lakes from Charlotte, where she had been running SLRC remotely for two years. Carpenter was followed a year later by Russell, who is originally from Nashville, Tenn.

On the opening day of the pickleball courts, a sizable crowd showed up at the club. Members were excited to hear Carpenter and Russell speak, watch some live matches, and join in on the game themselves. The club had clearly been expecting a crowd: there were heaps of burgers on the grill, a popcorn machine, drinks and deserts. A set of skillful players demonstrated in front of dozens of spectators, Carpenter among them, before everyone clambered onto the court to give it a try.

“Pickleball is the fastest growing sport in the nation,” said Russell. “Just last night, the U.S. Open aired live on TV for the first time ever.”

The sport is turning heads for several reasons. Unlike tennis, it’s fairly gentle and can be played with less mobility. The lack of distance between players makes chatting and socializing possible.

Contrary to popular belief, explained Russell, the game can still be a workout if that’s what you’re aiming for. “It’s all about how you play,” she said. “You get out what you put in.”

Pickleball has one trait that is particularly unique: “Mostly, it’s accessible,” said Carpenter. “It’s a sport for all ages.” The game was only recently considered to be for older folks, but has since spread to all different age groups. These days it’s popular among kids, teens, and adults alike.

“We’re just really excited to see so many different people out playing together,” said Russell.

Both women agree the courts will get lots of use in the years to come.

For details about joining The Racquet Club at Seven Lakes, please visit: https://racquetclubatsevenlakes.com/membership/