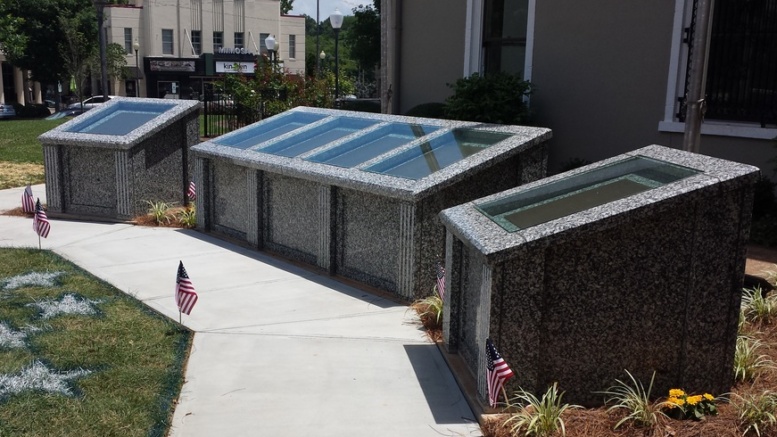 Early planning is underway to determine potential locations in Carthage for a permanent display housing replicas of America’s founding documents.

Moore County Board of Commissioners Chairman Frank Quis reiterated the importance that the Charters of Freedom project proceed as a bipartisan effort.

“We encourage everyone who is interested to get involved during the appropriate phase of the project to help complete this display, which the county will maintain as a legacy of our freedom for all to enjoy,” Quis said, reading from a short prepared statement.

The concept was initially presented to the board of commissioners in April by a representative of Foundation Forward Inc., a Burke County-based educational nonprofit founded by Vance and Mary Jo Patterson. The organization’s goal is to install permanent replicas of the Declaration of Independence, United States Constitution and Bill of Rights in all 100 North Carolina counties and, eventually, all 3,142 jurisdictions across the country.

Each Charters of Freedom setting is installed on publicly owned land while the actual project costs are funded through private donations. In May, county leaders unanimously approved the donation of county-owned land — or more accurately, the use of the future site — for the project.

Quis said several citizens, including veterans, have already stepped up to offer their support, leadership and fundraising capabilities, “for which we are grateful.”

County staff have been in touch with community contacts as part of their research into potential locations for a permanent display in Carthage, which is Moore County’s government seat.

“We continue to consider the most appropriate location for the Charters of Freedom with input from various stakeholders,” said Quis. “Our next step in this project will be the signing of a letter of intent from Foundation Forward. Once received and reviewed, we will assemble a steering committee to move the process along.

“As stated by Foundation Forward, this is a nonpartisan effort.”

Typically, each semi-circular Charters of Freedom setting also includes permanent pavers for citizens to honor family members, military or first responders, or business sponsors. In addition, a donors’ plaque would be placed at the Charters of Freedom setting, and a time capsule is also sealed at each project site to be opened on Constitution Day, Sept. 17, 2087, which is the 300th anniversary of the Constitution.