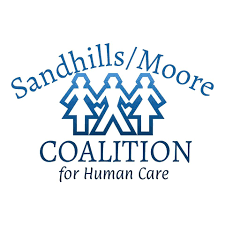 The Board of Director of Sandhills/Moore Coalition for Human Care is pleased to announce Stephen Phillips as its new Executive Director.

Phillips follows long term Executive Director, Barrett Walker, who announced her resignation in November. Mr. Phillips was selected after an intensive search led by current Board members and aided by Capability Company Consulting in Raleigh.

“We are excited to have Stephen take on the role of Executive Director of the Coalition,” said PJ Van Laningham, 2021 Board President. “Stephen has proven leadership skills and creative problem solving abilities as well as team development and strategic planning excellence. He has been described as leading ‘with integrity and a genuine care for others.’ The Board looks forward to working with Stephen, our partners, and funders to not only continue current Coalition programs, but expand them to more families in need.”

Phillips joins the Coalition after seven years with St. Joseph of the Pines, most recently as the Executive Director of Operations. Originally from Dayton Ohio, he received a Master’s degree in Clinical Exercise Physiology from Northeastern University. In addition to his work with St. Joseph of the Pines, he has also previously worked with Pinehurst, Inc and First Health of the Carolinas.

“I am excited and honored to step into the role of Executive Director of such an incredible organization,” said Phillips. “I thank the Board for this opportunity and look forward to serving those in need.”

Although Mr. Phillips will begin his role as Executive Director on March 3, 2021, former Director Barrett Walker will continue to assist with the leadership transition in a consultant capacity.

Sandhills/Moore Coalition for Human Care was established in 1986 by local churches to better serve the emergency needs of Moore County residents in crisis. Today, over seventy churches as well as businesses, individuals and civic groups throughout the community support the Coalition’s mission “to alleviate hunger and financial strains of struggling households in Moore
County.”

For further information on the Coalition, visit their website at
www.sandhillscoalition.org.