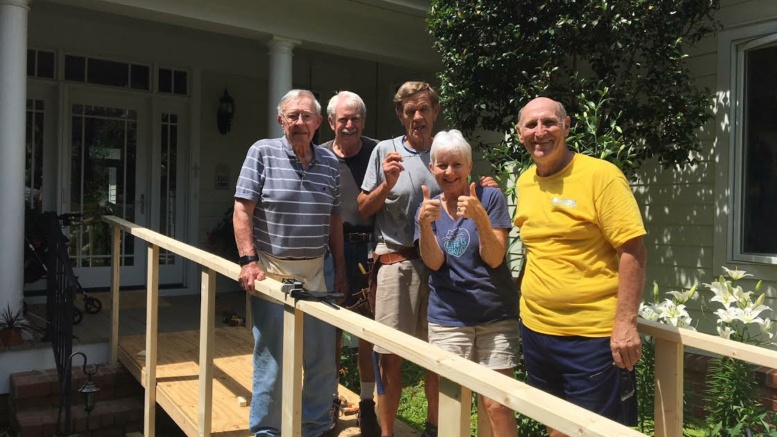 Phil Menendian never saw the car coming. It was an otherwise quiet Sunday afternoon and he was preoccupied with the task at-hand: updating information on a mobile sign owned by his church.

The SUV was traveling at full speed, according to eyewitness reports, when it drifted from its lane at the intersection of N.C. 211 and N.C. 73 in West End on Sunday, May 30. Colliding first with the sign, the vehicle also struck Menendian’s car parked nearby, totaling it, before coming to a rest.

Menendian only remembers a loud bang, nothing else.

Less than a block away his wife, Cathy, was attending a Vacation Bible School planning meeting at West End United Methodist Church (WEUMC). Both Phil and Cathy are active members, serving on different ministry teams, in addition to civic work in the community.

“We heard the sirens and had commented about it. I had my phone set on silent. All of the sudden, it was going crazy,” Menendian said.

On the other end of the line was a law enforcement officer letting her know that Phil had been injured. When she arrived on the scene, he was being stabilized in the ambulance in preparation to be airlifted to UNC Hospitals trauma center.

The driver of the SUV was taken to FirstHealth Moore Regional Hospital for treatment. She was charged with “failure to maintain lane” and received a fine. After consulting with their lawyer, the Menendians decided against pursuing further legal action against her.

“He was behind the sign and it probably saved his life. He did not have any head injury and that is a blessing. That is our takeaway from this.”

Nonetheless Phil faces a difficult road in the days to come. Both of his legs were mangled during the accident. Rods were placed in his right leg, where he’d suffered a compound fracture. His left ankle was shattered.

Next door neighbor Randy Blake drove Cathy to Chapel Hill where she first stayed in a hotel and later transferred to the SECU Family House, a nonprofit facility that provides affordable housing for UNC Hospitals patients and their families.

WEUMC quickly set up a phone tree to provide updates and a church friend went to Chapel Hill to sit with Cathy while Phil was in surgery. Sunday School children also filled a basket of goodies that was delivered to the couple.

Back at their house in the Seven Lakes West community, an even more ambitious plan was taking shape.

Bill Bower, a 93-year old retired engineer, his son-in-law Bob Forsman, and neighbors Dick Wiliams and Randy Blake began constructing wheelchair ramps — one at the front door and a smaller version to the back porch — of the Menendian home.

“When I got home, I just cried because I saw the ramp (in progress),” Cathy said. “We have always been the ones to give and help others. But someone reminded me that we need to learn to receive too, and that is hard.

“We have been so overwhelmed with all that has been done for us and will continue to do. We’ve received so many cards and texts. People keep telling us, “Don’t say thank you. Just tell us what else we can do.”

Phil has since been transported to Moore Regional Hospital for acute therapy and was expected to return home sometime in June.

“Being back in Moore County where we have friends and neighbors, that has helped his spirits,” Menendian said. “You hear a lot of negativity these days, but I want people to see what the other side looks like. In every community there is greatness and there are people helping others.”

Be the first to comment on "Church Family, Neighbors Care for One of Their Own"