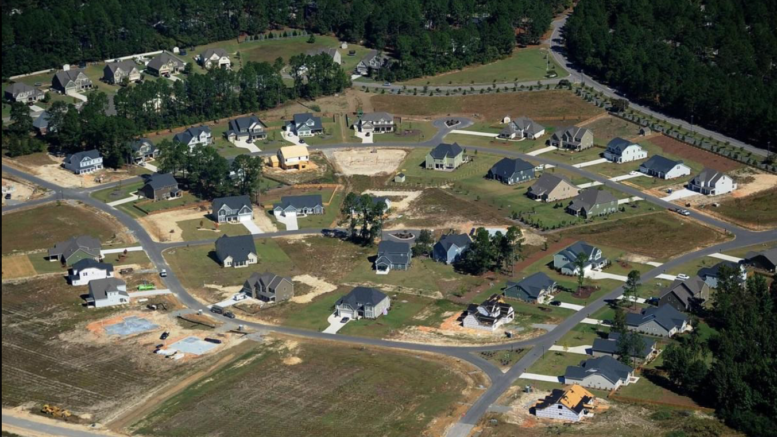 Aerial view of the Summerfield and part of the Arrowstone neighborhoods in Whispering Pines. Photo by Ted Fitzgerald/The Pilot

More houses, more businesses and more vehicles on the road are putting the squeeze on the small town ambiance of Moore County. But newly released census data indicates the area’s overall pace of growth has actually slowed in the last 10 years.

The 2020 census shows Moore County has seen a 13 percent increase in population, with the addition of 11,480 individuals since the last decennial count. By comparison, between 2000 and 2020, the county saw an 18 percent jump in population (13,478 people,) according to the U.S. Census Bureau.

North Carolina’s population also grew by 9.5 percent in the last decade, with a recorded population of 10,453,948 individuals. As a result, U.S. House districts will need to be redrawn to account for this change, as well as population changes over the decade.

Republican-leaning Moore County has shifted between congressional districts frequently in the last decade. The most recent map, approved in 2019, split Moore County between the 8th and 9th districts mostly along a north/south boundary line.

Not surprisingly, communities along the western boundary closest to Fort Bragg and the southern half of the county saw the most dramatic population increases in recent years. Much of that growth can be tied to the 2005 Base Realignment and Closure (BRAC) legislation that cleared the path for a substantial increase in force strength/personnel assigned to the base.

Whispering Pines saw the most growth — proportionally speaking — with a 2020 population count of 4,987 individuals. That represents a 70 percent increase over the previous census, when 2,928 people were counted as living in the village.

“Anyone who has been in Whispering Pines in the last 10 years knows it has grown significantly over this period. From the village’s perspective, the impact has meant we’ve added staff to deal with the demand for service,” said Whispering Pines Village Manager Rich Lambdin. “Public Works was probably stretched the most out of any department.”

Pinehurst, the largest municipality in Moore County, attracted the most new residents, with the addition of 4,457 individuals over the last 10 years. That represented a 34 percent increase, which closely matched the previous decade when Pinehurst saw a 36 percent jump. Over the last 20 years, the village has more than doubled its population.

Southern Pines saw the next highest uptick in new residents, according to the 2020 census, with the addition of 3,211 individuals, or a 26 percent increase. The updated population count stands at 15,545 making it the second largest municipality in Moore County.

Southern Pines Town Manager Reagan Parson said while a roughly 2.6 percent growth rate outpaces the previous four decades, when aggregated with the slower ten-year period following the Great Recession (2007-09), “we come straight back in-line with the longstanding 1.5 to two percent growth that Southern Pines has experienced for more than a half century.”

Parsons added that the growth surrounding Southern Pines has had as much impact on the town’s services as its own population growth.

“Given that we remain (along with Aberdeen) the center of commercial activity for a far larger surrounding area — think police and fire services from a traffic standpoint alone,” he said.

Aberdeen saw more modest growth compared to the previous decade when the town’s population jumped up 77 percent between 2000 and 2010. The new census figures put Aberdeen’s total population at 8,516, which is a 34 percent increase since 2010.

Other local municipalities seeing an uptick in population growth over the last 10 years include Carthage (26 percent) and Foxfire (43 percent increase).

U.S. Census data is used to determine the number of seats each state holds in Congress, and how more than $675 billion in federal funds are distributed back to states and local communities every year for services and infrastructure, including health care, jobs, schools, roads and businesses.

The 2020 Census kicked off in January last year in a unique position: it was the first in the nation’s history when data was primarily collected online. Most households in Moore County received a postcard-style invitation to respond to the census online, by phone or by mail in March. Additional mailings were sent to non-responsive households and census field workers, also known as enumerators, began knocking on doors over the summer.

However, there were noticeable differences in data collection rates from the start. The pandemic, technical issues and political infighting all factored in at various points.

In 2010, Moore County outpaced the state and nation when it came to returning the population census questionnaire. By the second week in April 2010, approximately 70 percent of Moore County households had participated.

At the same point in the self-response period of the 2020 survey, Moore County was already lagging behind state and national average response rate with only 42.2 percent of households participating.

Moore County also has a growing military population, so questions on how service members and their families would be counted was another concern raised. According to census officials, all people were to be counted where they live and sleep “most of the time” as of April 1, 2020 (Census Day).

Active-duty deployed soldiers were counted by the Census Bureau using administrative data provided by the Department of Defense, based on the service member’s usual residence in the U.S. Military service members and their families who were stationed outside the U.S. were counted according to their “home state of record.”

One of Moore County’s biggest outliers, in terms of data collection, was the unincorporated area of Seven Lakes.

The mostly gated communities had a very low self-response rate compared to the 2010 census. Many residents told The Pilot last summer that they had never received the postcard-style invitation while others reported that census field workers (enumerators) repeatedly were contacting them for the same information.

According to the 2020 census, Seven Lakes has a population of 4,900 individuals, a figure nearly identical to the 2010 count of 4,888 people, which seems unlikely in light of new homes constructed in the community over the last 10 years.

On the opposite side of Moore County, the village of Whispering Pines has a nearly identical population at around 5,000 people.

Both communities feature large lakes as a major draw for new residents. But while Seven Lakes — and the western side of Moore County as a whole — saw an uptick in population between 2000 and 2010, Whispering Pines’ population boom mostly occurred over the last decade with an influx of military-related families.

Lambdin said residential growth has driven development. The village’s commercial areas are limited and include the Food Lion shopping center on N.C. 22, the former Bluehorse Market building on Niagara Carthage Road and a handful of businesses including the community’s two golf clubs.

“Those are all things that require maintenance, upkeep and repairs. So with those things in mind, it was a no-brainer that we also needed to increase our staff,” Whispering Pines Rich Lambdin told The Pilot.

From a development standpoint, Whispering Pines is nearly built-out, “which leaves only infill lots within the municipal boundary for potential residential growth,” added Lambdin.

Whispering Pines Mayor Alexa Roberts said the growth over the last year has been steady and well-managed. More noticeable than the increasing population has been the shift in demographics as more families moved in.

“It is a wonderful, beautiful village where neighbors take care of each other. So it doesn’t surprise me that people want to live here,” Roberts said, noting that village leaders are carefully looking at long-range trends.

“We have lakes and dams that are expensive to maintain. Our subdivisions and infill lots are about built-out, and the municipalities surrounding us are expanding. At some point, we might become landlocked and not have the opportunity to grow….and the possibility of a stagnating tax base.”

Whispering Pines is also unlike most of the county’s other larger or growing municipalities in that it does not have a sewer system. The village is entirely served by septic systems. Public water is provided by Carolina Water Service, a private corporation that owns the water distribution system (approximately 65-70 percent of village homes) and is sourced from the town of Southern Pines, one-third by the municipal department which also draws its supply from Southern Pines, and a small portion served by Moore County.

On Tuesday, a developer presented a conceptual plan for a 455-lot subdivision on a parcel currently located in the village’s Extraterritorial Jurisdiction (ETJ). Lambdin said the site’s current zoning would limit development to approximately 250 houses but the developer’s intent is to request annexation and rezoning for the higher density proposed.

“Yesterday was the first public disclosure of that vision from the developer, so we are still in the infancy stage of discussion. But there has already been a lot of feedback, interest and concern,” he said.